Cookies help us deliver our services. By using our services, you agree to our use of cookies. More information

From Worlds of the Aether
Jump to navigation Jump to search

This article is about the galaxy where most events take place. If you're looking for information about other galaxies, check galaxy.

The Milky Way Galaxy or simply the Galaxy is the center of modern interstellar society and the only known inhabited galaxy. All known civilizations inhabit this galaxy or its counterparts in other dimensions. It's known under various names in different worlds, many relating to its appearance as a stretch of semi-transparent off-white matter crossing the sky. The total number of inhabitants is hard to define due to imprecise definitions of sentience and large swathes of the Galaxy remaining unexplored. 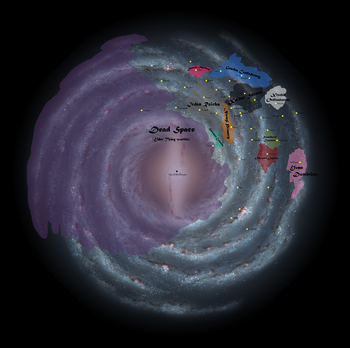 Accords Sector is home to the capitals of all major members of Gnadra Accords, including Gnadra Confederacy, Irden Reichs and the dead remains of the Xa'tac worlds. It's the most populated and best explored part of the Galaxy, with hundreds of populated worlds and even more uninhabitable worlds used for harvesting resources. Definitions of the sector's borders have changed as the Accords' power has expanded but it's currently said to stretch from the far borders of Dracon Imperium and Irden Reichs to the Antawei-Malamoch line.

Terminus Sector is a poorly explored part of the Galaxy located counter-clockwise from the Accords Sector. Once believed dangerous due to primitive and aggressive cultures within due to early Gnadra explorers, it is now seeing significant efforts to establish contact with budding worlds. The Dracon Imperium was once said to be part of this sector, and the dohwar homeworld of Wawhira and the recently discovered Ivarind are located firmly within it.

Located clockwise from the Accords Sector, Liminus Sector was always seen as the "wild frontier" of the galactic society, where many rough worlds awaited exploration and exploitation. The mercane had a large part in its exploration, discovering the Strahdholdt Domains and their perennial enemy, the Osh'wari here. It's largely a haven for various crime lord and pirates who use poorly populated, poorly guarded worlds in the Liminus Sector as staging grounds against organized civilization.

As per the name, Unknown Regions is a large part of the Galaxy between the Liminus Sector and Dead Space. Modern galactic society has very little knowledge of what lies within Unknown Regions, with few explorers going that far. Thousands of years ago, it was home to the first wave of interstellar civilization which either collapsed, went extinct or reverted into a more primitive state. Earth lost virtually all of its technology and is slowly making its way back up, while Zatz is using pieces of its former powers with a superstitious belief in a geocentric universe. The Scro collapsed so thoroughly, many of orc populations they left behind throughout the sector no longer have any idea about their origin and the forgotten troll empire left behind only ruins.

Dead Space is a large part of the Galaxy believed to be either occupied by the Elder Things, their cults or simply dead, barren worlds, scoured of life by the eldritch abominations. It's highly unadvised to venture into these sectors due to the dangers few individuals or states can withstand. All travel to and from Dead Space is banned by the Gnadra Accords.